I have a super freaky memory for stuff that really doesn’t matter whatsoever. I can memorise entire episodes of Peep Show that I’ve only seen once or twice…but remember to take my lunch to work? Buy milk when I go shopping? Someone’s birthday? Nope, doesn’t register. This automatic sectioning off of my ability to remember important stuff meant I got average grades at A-level and ended up emotionally jaded against people that got into Cambridge and Oxford. I mean I wasn’t clever enough to get into Cambridge or Oxford but my grades would probably have significantly improved if I hadn’t had the theme from cult 90’s comedy show “The Mary Whitehouse Experience” playing continuously in my head during my English Literature exams.

This happens with news stories as well. The news is pretty much a well established set of stories with interlinking continuity that if you’re not caught up with it, you’re going to get lost. Its kind of like comic books having a massive multiverse that would make your head explode and take years to memorise all of it. Catching up takes time and so my brain sections it off and doesn’t bother with it. What’s up with the Syrian rebels at the moment? Why are there massive protests in Turkey? Why are people afraid of the new Iranian president? What is the reason people give for not really seeing North Korea as the serious nuclear threat it claims to be? What’s Vladimir Putin done recently that’s bound to have pissed people off? I don’t know, I can’t remember anything I’ve read about it and have no interest finding out the hows or whys. However when it comes to tiny insignificant stories that don’t really matter and are just printed for the light hearted fluff of it all; that I do remember. So when I see this: 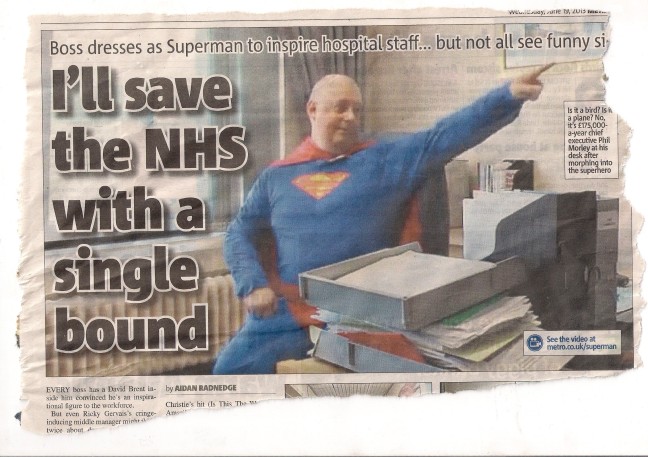 Which is talking about an NHS boss called Phil Morley making a cheesy cringy employee motivational video (which can be seen and laughed at in full here: https://www.youtube.com/watch?v=RW3kRj_MCv8 ) to get them to stay fit and healthy at work while dressed as Superman in a shallow desperate bid to say he’s filling his role and justifying his six figure salary, who they’re making out to be worse than Hitler in this story. When I see that then my question is, hang on a second, anyone remember this?

Yeah, a few months back a guy brought a criminal to a police station dressed as Batman and I specifically remember that most news outlets, including the Metro thought this was all cute and quaint and admirable. I mean yeah it is different, a superhero is a masked vigilante turning in the criminals to the authorities and not some guy in an office making cheesy promotional videos, and yes this Phil Morley twat gets his pay from taxpayer money, but at the same time they’re both doing a job while dressed as superheroes, except one is paid quite a lot for it and one isn’t. It’s an interesting question of where you draw the line.

Admittedly the guy dressed as Batman wasn’t officially employed by the police to turn someone in and succeeded in his role as vigilante, while the NHS boss was…well being a twat and got paid taxpayer money for it. Same time though, vigilantism is technically not okay, as is being a twat, so who’s to say which is right and which is wrong?

Still, we’ve got two of the emergency services aided or annoyed by costumed heroes. The police and the health service; one police related superhero hailed as a decent member of society, one health related superhero completely backfired in his attempt to enthuse workforce morale. Now all we need is for the firemen to dress like the X men and people to go “meh, s’okay I guess” and we’ve got the complete spectrum of the good the bad and the just okay I suppose.

Alright, yes I will admit spending public money on the people making this dumb video is a talking point. Especially since the NHS is kind of stretched to its limit at the moment with regard to funding. Staff go without breaks, spending cuts across the board, there’s a lot of problems with the NHS at the moment and with a fairer system in place to ensure everyone gets a decent wage, then we’d have less reason to complain about shit like this wasting valuable resources. Yes I agree with all of that but I just find it hard to get pissed off at this like most people calling it an insult to the taxpayers that pay for the NHS rather than an insult to the workforce that are the real victims of NHS cuts as that’s really what affects the people receiving treatment.

Yes it is an insult to the workforce in terms of wasted time, money and effort. Its also an insult on grounds of “hey everyone! Why’re you so unenthusiastic at work! Let’s be superheroes!” Bosses trying to be motivational kind of always backfire for very simple reasons. I’ve been there myself when it comes to qualms with attempts at “morale boosting”. I used to work in customer service and am well versed in the mental middle fingers to people who think that the way to get someone to smile and be happy with their job is to just say “come on smile and be happy misery guts!” because that will make them smile. Really? I can smile? I thought I was supposed to look miserable. Thank you for enlightening me, just telling me to smile has made me so much happier. Ahh, let’s all pick flowers beneath a rainbow, everything’s alright now you’ve just said the words “cheer up you miserable git” its like you exude happiness from yourevery orifice.

Pointing out that someone is unhappy and unfit is not morale boosting, its openly going “NERNER!! I’M HAPPY WITH WHERE I AM IN LIFE AND YOU AREN’T!! NERNER!” I can totally sympathise if you are an NHS worker looking at this from that perspective.

This is a true story: in the US, five hundred and ninety two thousand dollars of state funding was given to this man

To study and find the answer as to why apes seem to have a pre-conceived compulsion to fling their shit at people………………….taxpayer funded study. Seriously, the guy’s dancing to Tony Christie while dressed as Superman. Calm the fuck down.

Stuart would like to note he is a UK taxpayer and also thinks this twat shouldn’t have got money for this. He just thought it was a talking point

On a completely unrelated note, I picked up the Standard recently and saw this advert for Game of Thrones: